Request An Appointment
Talk to a Specialist
View The Course Calendar 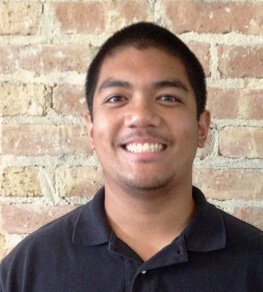 Montel, our rehab tech of three years, became a physical therapist assistant in October, working full-time. He earned his associate’s degree from the physical therapy assistant program at Fox College in August.
Montel took and passed the grueling licensure exam in October, too. It is notorious for the rigorous security at the testing centers and for the difficult questions on musculoskeletal pathologies and anatomy. The most difficult questions for him were about neuro- and cardiopulmonary systems. “It was very stressful,” he says. “I was always second-guessing my answers.”
His new role will differ from the old one in that he will be employing manual therapy techniques (“going hands-on” as we say) in addition to supervising exercises.
Montel decided upon Physical Therapy as an occupation during his senior year in high school. Then a defensive lineman and discus thrower, his decision was based upon his love of helping people (and recovery from a femoral fracture for which he spent six weeks in PT).
The progress Montel sees patients make during their treatments along with the relationships he forms with them are his reward. He also feels rewarded by the relationships formed over multiple visits.
Posted in Comfortable Atmosphere at Be Fit, General Information, Physical Therapy
← Wonderful Florida Trip Because of Physical TherapyPhysical And Financial Advantages of Not Ignoring Pain →